I just got back from an amazing rally in support of Eretz Israel. It was 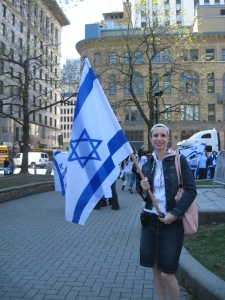 called to start at 11, at Phillips Square, so I and a couple of galpals hopped on a train and made our way downtown. We got to the Square to see hundreds of other celebrants milling around, Israeli flags being handed out left right and centre, and the music was blaring. It was an awesome atmosphere.

When it seemed like the Square couldn’t hold anymore people we all started marching toward Place Du Canada. Imagine the sight of 10,000 people in blue and white, with Israeli flags, marching through downtown Montreal. Old and young, religious and secular, Jew and non-Jew, all marching b’yachad – together. 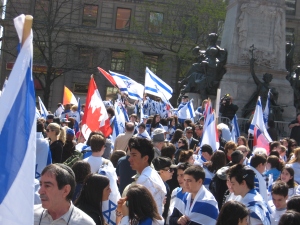 We got to Place Du Canada and the music was so loud but it was in our hearts too. I have to say that the old traditional folk songs were great, but I wasn’t right pleased about the way they gospelled up some of the songs…Seriously, Adon Olam sounded like they were singing it in church. OK I am a grump sometimes!

They had a bunch of the requisite politicians show up, most notably Stockwell Day representing our Prime Minister. He spoke so well, made reference to the offensive comments Ahmadinejad spewed forth the other week, and told us that Canada will not tolerate that kind of behaviour. He praised Israel and promised to stand by us. Similar speeches followed – but his was totally the best.

There was more singing and dancing, and finally it was time to end. We all sang O Canada – was pleased to see some men remove their hats / caps. Then we joined together to sing Hatikvah. I read a post yesterday (have to find it) about a child watching her parents sing Hatikvah with tears in their eyes – I thought of that today as I sang, as tears rolled down my face. 61 years of being officially a nation – how much pain and loss and suffering has gone into keeping our homeland. We sing “to be a free people” – will we ever truly be free when we are continually persecuted just because we exist? Why are we the only country in the world who has to defend its’ right to exist.

The poisonous Neturei Karta were there – not many of them though. They were kept far away from the crowds and the police kept a beady eye on them. After the rally I walked past where they were standing and a police officer asked me to roll up my flag to walk by. I did so reluctantly – I wanted so much to put these people in their place, but it would have been a wasted effort.

It was a great celebration and I was thrilled to have been a part of it.

This entry was posted in essay and tagged yom haatzmaut. Bookmark the permalink.

What do YOU think? Cancel reply