Remember the long phone calls we had and emails etc when I was thinking of dating the KoD? Remember us jumping up and down at opposite ends of the country when things started to go real well? Remember the looong phone call we had when I drove back from Lake George that night, after meeting him, where we were both crying happy tears?

You were there with me every step of the way. You encouraged me and helped me, and devil’s advocated me when necessary. But through it all, you were my friend and felt such joy at our happiness. You know what I had been through, and you truly wanted the best for me. We found him, didn’t we??!!

So today when the KoD and I celebrated this special anniversary, I wanted to take a moment to thank you for your unfailing friendship and eternal support. Being a friend is easy, being a good friend takes a lot of hard work. Thank you for everything. I love you girlie.

This is the pretty face of my sweet friend. I wish you only the best that life has to offer.

An Oldie But a Goodie

got this via email a while back.

You will need the following; a cup of water, a cup of sugar, flour, 4 large brown
eggs, two cups of dried fruit, a teaspoon of salt, a cup of brown sugar, lemon
juice, nuts, and a bottle of Scotch whiskey.
Sample the whiskey and check the quality.

Take a large bowl. Check the whiskey again. To be sure it is the highest quality,
pour one level cup and drink. Repeat. Turn on the electric mixer, beat one cup of
butter in a large fluffy bowl.. Add one teaspoon of sugar and beat again.

Make sure the whiskey is still okay. Cry another tup. Turn off the mixer. Beat
two leggs and add to the bowl and chuck in the cup of dried fit. Mix on the
turner. If the fired druit gets stuck in the beaterers, pry it loose with a
drewscriver.

Sample the whiskey and check for tonsisticity. Next, sift two cups of salt. Or
something. Who cares? Check the whiskey. Now sift the lemon juice and strain
your nuts. Add one table. Spoon. Of sugar of something. Whatever you find.

Grease the oven. Turn the cake tin to 350 degrees. Don’t forget to beat off the
turner. Throw the bowl out of the window. Check the whiskey again and go to
bed.

It was a year ago today that the KoD and I met online. Such a wonderful year. Wonderful because we found our soul mate. Such a blessing, such an awesome feeling to know I am with my beshert.

Last night I spent a good hour reading through the initial emails that were flying back and forth between us. I laughed, I cried, I felt my heart expand even more. Jokes about us both having baggage – me wondering if it was a matching set, him asking if his luggage needed to be pink. Me telling him that Pinkitude comes with me, package deal, and he has to be able to handle that. Him telling me it was no sweat, easy peasy. 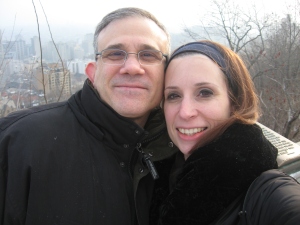 Exchanging photos of the kids and kvelling over them. Him constantly asking me that night for my phone number and me making him wait a day or two until I allowed him to call me. Playing hard to get works sometimes you know.

He took a risk and told me about Lucille, his Harley. I fell off my chair in absolute delight. Risk paid off, eh, KoD? I was lucky enough to ride Lucille with the KoD this summer. Truly an awesome experience.

Those first few emails – the email thread was at least 200 emails long – brought us closer, in a matter of mere hours. I still remember sitting at my kitchen table eating dinner with my laptop for company (kids were at their dad’s for dinner) when I got the first email. By the time we had finished the kids were home, all tucked up in bed and I was sat on the sofa in the living room with a huge grin on my face. The attention was awesome and flattering, and I had a feeling he was an awesome guy.  I didn’t want to go to sleep in case he replied to the last email I had sent. I think he felt the same way.

It was ten days until we met in person in Lake George. Ten days of hours spent on the phone every night, sleep not necessary. From the moment we physically met that was it, inseparable forever. Here is the story about that night.  The following weekend the KoD wanted me to come to Monsey to meet his people, to see where he lived etc. He drove up to Montreal to pick me up. He drove almost 6 hours to get me, and 6 hours to get back to Monsey. And did the same for the reverse journey. What a guy!! It was awesome to sit and talk in the car and really spend time together without any distractions. We talked and talked. I subjected him to some of my music. I am an 80s chick all the way. I am still way touched that he didn’t ask me to switch it off. That’s love for you. He’s a blues man thru and thru.

Now that was an awesome weekend. I stayed at friends of his, who are now my friends too. We ate one of the Shabbat meals at a family who I had known here in Montreal years ago – so they could have, if we had asked, vouched for either one of us to the other. It was so important to see each other in our own environments. We had a black tie event that Saturday night – and he was so proud to walk in there with me! It was all people he knew and worked with, no one I recognized, but I was just so happy to be there with him as his date. By this point we both knew that this was it, that we were meant to be together. 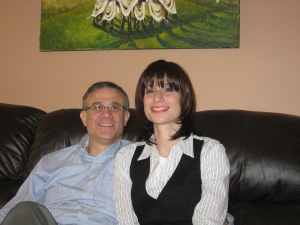 It wasn’t long before he came up to Montreal and met my boys and got their seal of approval. Soon after, we became engaged – he proposed in front of my boys after privately asking their permission. We were married February 15th 2009 in front of God, friends and family. Click here, here and here for the wedding story.

The time we spend together is awesome, but it is never enough. I love watching the KoD with my boys – they adore him and respect him and love him to pieces. Some nights when he calls when they are still up I cannot get to the phone to speak to my husband for an hour while they all fill him in on their day – and he has the patience to listen. (More than I do, sometimes). It will be just a couple more months until we will be living together under the same roof in Monsey, having been granted our entry visas (please God let it happen soon soon soon). 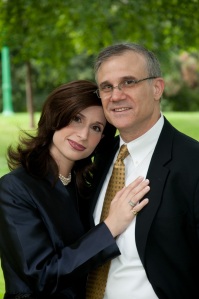 After a whole year of knowing my KoD, I am more in love with him now than I ever was. My love for him grows every day. It’s hard to even remember a time when he wasn’t in my life. He completes me. When I was dating I knew I didn’t need a man to make me happy. I worked on myself a lot, and knew that my own personal happiness and satisfaction had to come from within. If you rely on someone else for that you are setting yourself up for failure. The KoD adds to that. He builds on that. However awesome I felt about myself, there is no way I could make myself the centre of my universe. With kids, no mom can do that. The KoD has put me squarely at the centre of his, and I know he will deny me nothing. I know his love for me is pure and deep. I see it when I look in his eyes and see his soul.

I just wish we could celebrate this landmark day together.

My true love hath my heart and I have his……