Talk about something else!!!

My children are the best!! No really! They are! Those of us with children adore them and boast about them and know that they are the best kids on the planet. They do everything better, faster, they are stronger, more handsome, more everything than anyone else’s kids. Ok, you and I know that they are just kids, they are human, they mess up occasionally, and are really just your average children BH. We all like to boast occasionally and show off pictures and discuss milestones. It’s what parents do. No one is a more hands on mother than I. No one is prouder of her sons’ achievements than I. But I can talk about other things and other subjects, and I do. Often. And I enjoy being a person other than “Ima”.

We have some friends who it seems all they can talk about is their kids. When you relate any story about anything they find a way to tie it in with an anecdote about their kids. Anywhere you went on vacation, their kids went there, or knew someone who did. A new restaurant you went to – their kids wanted to try it. Every single conversation you have with them has to revolve around their kids. There is more to me than just being a mom. I love my kids with an endless passion. I do. However I don’t need to inject their awesomeness into every single conversation.

It’s come to the point that we don’t want to be around this couple any more. We can be talking politics or religion and every comment leads back to their children. Their children are smarter, brighter more accomplished that any other person in the world, apparently. You and I both know it isn’t true. Maybe deep down they feel that their kids have grown up and flown the coop, and therefore they have separation anxiety – the parents that is! But it seems every time they build up their kids in a conversation, it denigrates our kids. If I am telling over something funny that my kids said or did, their kids did or said something funnier. Like it’s a competition or something.

Look, I am not going to pretend that when we go out with other couples, that we don’t talk about the kids. We do. But in passing, or to tell one or two funny anecdotes. The subject of children does not overwhelm the conversation.

These people are educated professionals who have full lives. I wonder why it is that they cannot stop themselves interjecting their progeny into every discussion. They are wonderful people as individuals, and are more than just these kids’ parents. I want to tell them that their kids are great kids, but no more special than anyone else’s. They haven’t accomplished the impossible or found a cure for cancer, or won citizen of the year awards. They are just average grown up kids. Period.

It just stuck in my craw recently. Do you think there would be a point in telling them they are pushing people away with their obsessive talk about their kids? 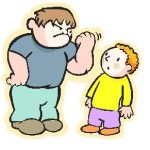 What is the best way to deal with bullies, when you are in a grown up environment? At the schools we send our kids to, we are all told there is zero tolerance for bullying, any child that bullies another will face major consequences.

But what about the grown-up world? What consequences do the bullies face? I was recently verbally bullied by someone who is supposed to know better. I was subjected to the most horrible string of invectives and slights on my character (or lack thereof, according to this person). Because this was a person in a position of authority, I felt unable to fight fire with fire. I unfortunately needed something from this individual, and he was the only one with the power to grant it to me. I have never been spoken to in such a disgusting and loud manner. I have never had someone question my integrity as a person, as a wife, as a mother, as a Jew, all in one screamed breath. I was horrified at being spoken to with such obvious disregard, and frustrated that I was unable to defend myself throughout this diatribe as every time I opened my mouth to speak I was yelled at.

I wish I could go into specifics, but I cannot, I have to protect the guilty. But I do want to know, if you would have been in a similar situation, how would you have handled it? What is the best way to stand up to bullies? If no one stands up to them how are they ever going to learn that they are wrong? Can they ever learn that this is not the way to behave?