….is always suspicious when there are four kids in the house. Last night there was much whispering, and then dead silence for a few minutes. I knew the boys were up to something, but I wanted to see how it played out.

Not too much later all four of them knocked on my open bedroom door and asked to come in. They had huge smiles on their gorgeous little faces. The oldest handed me an envelope. It had a Happy Anniversary card in it, for me and the KoD, signed by all of the kids, with a couple of them adding their last name, in case I wasn’t sure who it was from. I bawled like a baby, they rolled their eyes, and we had a group hug.

I was very impressed that they did this on their own, went to get the card with their own money without my knowledge. I called the KoD straightaway to tell him. His first comment – did you cry? Am I that much of a sap? Yeah…..ok. 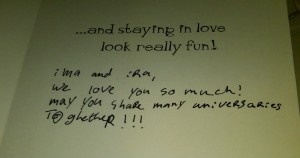 This entry was posted in joys of boys, kids. Bookmark the permalink.

What do YOU think? Cancel reply